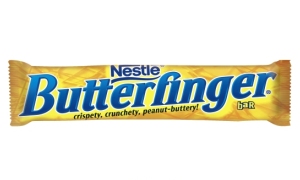 It’s the end of the world as BUTTERFINGER® knows it! Counting down the days to the Mayan prophecy predicted for December 21, 2012, Butterfinger today embarks on a nationwide tour with the Butterfinger BARmageddon News Network (BBNN) news van.

Built to collect evidence, the BBNN news van features state-of-the-art news equipment and never-before-seen devices with potentially supernatural capabilities. Armed with early evidence of BARmageddon, such as video of last month’s bizarre crop circle in Kansas to eyewitness accounts of the disappearance of Butterfinger candy bars, the BBNN is taking the strange tales from Manhattan, Kansas, to Manhattan, New York, the media capital of the world.

“Since April 1st, we continue to hear more and more stories about strange occurrences involving Butterfinger that seem to be related to the end of the world,” said Butterfinger brand manager Jeremy Vandervoet of Nestlé USA. “Butterfinger is on a mission to tell those stories and uncover who is laying a finger on everyone’s beloved candy bar. What better way to engage with Butterfinger enthusiasts, conspiracy theorists, and news hounds alike, than a real-life, roving news network that keeps us all connected and informed as the end of the world draws near.”

A news network like no other, the BBNN is dedicated to uncovering real-world footage of BARmageddon perils – any evidence of the end of the world and to uncover the truth behind the recent Butterfinger bar disappearances across the country. Interviews and incredible stories will be available to the public via exclusive BBNN reports within the BBNN on Yahoo! Screen, Yahoo!’s video destination. Viewers can access the BBNN subpage on www.ButterfingerBARmageddon.com.

The BBNN news van will travel North America from coast to coast, making stops along the way at the United States’ kitschiest—and sometimes most revealing—roadside attractions and unexplained mystery sites, including Roswell, the Petrified Forest in northeastern Ariz., the waterfront Blue Whale structure of Catoosa, Okla., and the world’s largest basket in Newark, Ohio. The BBNN will operate with two expert conspiracy theorists, Jason and Adam at the helm, ready to keep Butterfinger fans everywhere informed about potential threats to their beloved bars and reveal evidence of the end of times. Along the way, lucky consumers who spot the van will get a chance to try the new Butterfinger Bites, easy to eat bite-size pieces of the beloved Butterfinger candy bar, perfect for road trips.

The final stop for the BBNN will take place on the west coast in mid-July, when masked men and the true geniuses behind every known conspiracy theory in the world convene in San Diego, at the largest comic book convention of its kind. There, Butterfinger will reveal its latest BARmageddon news and findings.

Among the exciting news stories to be covered by the BBNN – strange weather patterns taking place the world over, a troupe of Silicon Valley moguls declaring intentions to extract water and precious metals from orbiting asteroids, a 150-pound, 450-million-year-old fossil nicknamed "Godzillus” that has scientists stumped over its ancient origins, and of course, the unprecedented disappearance of Butterfinger bars from four well-known cities – Milan, Moscow, Montezuma and Manhattan – coincidentally occuring as the world’s first crop circle featuring a Quick Response Code (QR Code) appeared in the center of a Manhattan, Kansas wheat field.

Butterfinger fans and conspiracy theorists with any BARmageddon stories to tell or end-of-the-world mysteries should submit their news tips to the BBNN at Facebook.com/Butterfinger.

Named one of “The World’s Most Admired Food Companies” in Fortune magazine for fourteen consecutive years, Nestlé provides quality brands and products that bring flavor to life every day. From nutritious meals with Lean Cuisine® to baking traditions with Nestlé® Toll House®, Nestlé USA makes delicious, convenient, and nutritious food and beverage products that make good living possible. That’s what “Nestlé. Good Food, Good Life” is all about. Nestlé USA, with 2011 sales of $10 billion, is part of Nestlé S.A. in Vevey, Switzerland — the world’s largest food company with a commitment to Nutrition, Health & Wellness — with 2011 sales of $94 billion. For product news and information, visit Nestleusa.com or NestleNewsroom.com.

Yahoo! (NASDAQ:YHOO) is the premier digital media company, creating deeply personal digital experiencesthat keep more than half a billion people connected to what matters most tothem, across devices and around the globe. And Yahoo!’s unique combination of Science + Art + Scale connects advertisers to the consumers who build theirbusinesses. Yahoo! is headquartered in Sunnyvale, California. For more information, visit the pressroom (pressroom.yahoo.com).