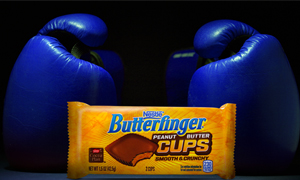 Upon learning that NESTLÉ® BUTTERFINGER® CUPS are a key part of the training regimen of “Fighter of the Decade” boxer Manny “Pacman” Pacquiao, Butterfinger has bet one million on its newest fan, Pacquiao, to win the “Fight of the Century” which will take place on May 2, in Las Vegas. Pacquiao, boxing’s only eight-division world champion, is preparing for his biggest career challenge by adding a secret weapon to his training table.
“When I am training, I never cut corners, and that is what makes Butterfinger Cups the best peanut butter cup – they don’t cut corners either,” noted Pacquiao. “Butterfinger and I always go the extra mile to distinguish ourselves. For us, being different is the difference.”

ABOUT MANNY PACQUIAO
Manny “Pacman” Pacquiao is world champion professional boxer. He is the first and only eight-division world champion with 10 world titles, as well as the first to win the lineal championship in four different weight classes. Beyond boxing, Pacquiao has participated in basketball, business, acting, music recording, and politics. In May 2010, Pacquiao was elected to the House of Representatives in the 15th Congress of the Philippines, at the age of 32, representing the province of Sarangani. He was re-elected in 2013 to the 16th Congress of the Philippines.