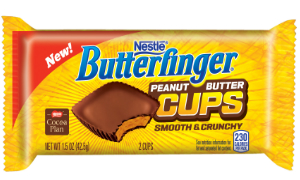 BUTTERFINGER, the beloved crispety, crunchety, peanut-buttery candy bar, is confirmed to make its first Big Game commercial debut in 2014, marking the first time for Nestlé USA to advertise one of its brands at the most watched nationally televised sporting event in the country. “We hope the Big Game attracts the largest audience ever to lay a finger on BUTTERFINGER, and we’re excited to showcase our brand’s irreverent sense of humor on this national stage for the very first time,” said BUTTERFINGER brand manager Jeremy Vandervoet. The commercial during the Big Game will support the introduction of BUTTERFINGER Peanut Butter Cups, the biggest product launch in the BUTTERFINGER brand’s 90ish-year-old history.

BUTTERFINGER Peanut Butter Cups will take the classic peanut-butter and chocolate combination to a whole new level by adding a dose of BUTTERFINGER and showing how “the cup just got crunchy.” Each cup features a smooth, super peanut-buttery Butterfinger filling with just the right amount of crunchy pieces mixed in, all surrounded by delicious pure milk chocolate. Peanut butter cups will never be the same again! The new BUTTERFINGER Peanut Butter Cups will be available in retail stores nationwide in January 2014.

BUTTERFINGER is a one-of-a-kind candy bar with the crispety, crunchety, peanut-buttery taste people love. No other candy bar comes close to the intense flavor and texture of a BUTTERFINGER. In 2013, BUTTERFINGER marked its “90ish” anniversary as the candy bar originally invented by Chicago’s Curtiss Candy Company was believed to have been promoted as early as 1923 (before it ultimately was sold to Nestlé in 1990). Keep up with the latest news about BUTTERFINGER at Facebook.com/Butterfinger or follow its sweet tweets at Twitter.com/Butterfinger.

About Nestlé USA
Named one of “The World’s Most Admired Food Companies” in Fortune magazine for 16 consecutive years, Nestlé provides quality brands and products that bring flavor to life every day. From nutritious meals with LEAN CUISINE® to baking traditions with NESTLÉ® TOLL HOUSE®, Nestlé USA makes delicious, convenient, and nutritious food and beverage products that make good living possible. That’s what “Nestlé. Good Food, Good Life” is all about. Nestlé USA, with 2012 sales of $10 billion, is part of Nestlé S.A. in Vevey, Switzerland — the world’s largest food company with a commitment to Nutrition, Health & Wellness — with 2012 sales of $98 billion. For product news and information, visit Nestleusa.com or Facebook.com/Nestle.