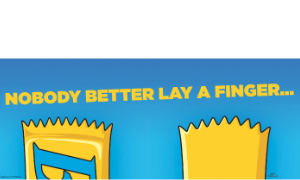 Back Together. And Better Than Ever!!

The newest marketing campaign featuring Bart Simpson is set to launch today through digital and social media outlets. Out-of-home advertisements for the Butterfinger “Nobody Better Lay A Finger” nationwide campaign will also appear later this summer in New York, Los Angeles and Chicago, with the initial campaign artwork highlighting the top of Bart’s iconic head juxtaposed to the edge of the similarly shaped Butterfinger wrapper. Additionally, the campaign will engage consumers in select retailers nationwide and as part of the reunion, fans can take part in an upcoming online instant win and sweepstakes game.

Bart first appeared in Butterfinger commercials in 1988. Dozens more commercials followed through 2001, as Bart went to great lengths to cleverly keep hungry fans from stealing his favorite bar, warning “nobody lay a finger” on his Butterfinger.

“We are thrilled to partner with  Nestlé Butterfinger and The Simpsons on a program that is both iconic and nostalgic,” said Jeffrey Godsick, President of Fox Consumer Products. “The connection between Bart Simpson and Butterfinger has endured over the years and we are delighted to unveil a fresh campaign that will excite fans.”

Butterfinger is a one-of-a-kind candy bar with the crispety-crunchety, peanut-buttery taste people love. No other candy bar comes close to the intense flavor and texture of a Butterfinger. In 2013, Butterfinger marked its “90ish” anniversary as the candy bar originally invented by Chicago’s Curtiss Candy Company was believed to have been promoted as early as 1923 (before it ultimately was sold to Nestlé in 1990). However, Butterfinger parent company Nestlé holds a trademark document from 1928, thus the 90ish reference, keeping in line with the brand’s irreverent sense of humor. Keep up with the latest news about Butterfinger at Facebook.com/Butterfinger or follow its sweet tweets at Twitter.com/Butterfinger.

Named one of “The World’s Most Admired Food Companies” in Fortune magazine for 16 consecutive years, Nestlé provides quality brands and products that bring flavor to life every day. From nutritious meals with Lean Cuisine® to baking traditions with Nestlé® Toll House®, Nestlé USA makes delicious, convenient, and nutritious food and beverage products that make good living possible. That’s what “Nestlé. Good Food, Good Life” is all about. Nestlé USA, with 2012 sales of $10 billion, is part of Nestlé S.A. in Vevey, Switzerland — the world’s largest food company with a commitment to Nutrition, Health & Wellness — with 2012 sales of $98 billion. For product news and information, visit Nestleusa.com or Facebook.com/NestleUSA.

The longest running scripted show in television history, THE SIMPSONS exploded into a cultural phenomenon in 1990 and has remained one of the most groundbreaking and innovative entertainment franchises, recognizable throughout the world. Matt Groening created the iconic family: Homer, Marge, Bart, Lisa and Maggie. Currently in its record-annihilating 24th season, THE SIMPSONS celebrated their historic 500th episode in February 2012.  The series has won 27 Emmy Awards, been the subject of a hit feature film, created “Krustyland” and a revolutionary virtual coaster – The Simpsons Ride – at Universal Studios, received a Star on The Hollywood Walk of Fame, been honored with five U.S. postal stamps personally designed by Matt Groening, and named the “Best Show of the 20th Century” by Time Magazine.

THE SIMPSONS is a Gracie Films Production in association with 20th Century Fox Television. James L. Brooks, Matt Groening, and Al Jean are the Executive Producers. The Gracie Films Worldwide Brand Division develops and produces the licensed content for the series. Film Roman is the animation house.