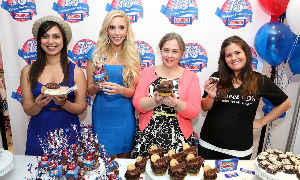 “As an all-American treat invented and still made today in the USA, Nestlé Crunch is thrilled to celebrate its first 75 years with our fans and some of the nation’s top bakeries,” said spokesperson Tricia Bowles of Nestlé USA Confections & Snacks. “There’s no sweeter way to celebrate this milestone than by having award-winning bakeries and pastry chefs create new Crunch-inspired treats, just like many of our fans do at home every day.  And we’re challenging you to pick your favorite, one that will be named the ultimate Nestlé Crunch treat worthy of any celebration.”

The top three Crunch-inspired treats, receiving the most votes on Facebook through April 21, will be featured in a grand prize bake-off. The #1 grand prize winner will be selected by the Nestlé Crunch culinary team, along with all-star baker and celebrity chef Carla Hall. Hall is best-known to television viewers as a co-host on ABC's lifestyle series "The Chew" and is owner of her own artisan cookie company Alchemy by Carla Hall.

How Nestlé Crunch fans can have fun and win, too! – Each time a fan votes at Facebook.com/NestleCrunch, he/she will have a chance to instantly win a Nestlé Crunch single bar. Additionally, all participating bakeries will be selling or sampling their special Nestlé Crunch 75th Birthday Treat entries during the contest period.

About the History of Nestlé Crunch

Named one of “The World’s Most Admired Food Companies” in Fortune magazine for 15 consecutive years, Nestlé provides quality brands and products that bring flavor to life every day.  From nutritious meals with Lean Cuisine® to baking traditions with Nestlé® Toll House®, Nestlé USA makes delicious, convenient, and nutritious food and beverage products that make good living possible.  That’s what “Nestlé. Good Food, Good Life” is all about.  Nestlé USA, with 2012 sales of $10 billion, is part of Nestlé S.A. in Vevey, Switzerland — the world’s largest food company with a commitment to Nutrition, Health & Wellness — with 2012 sales of $98 billion.  For product news and information, visit Nestléusa.com or Facebook.com/NestléUSA.