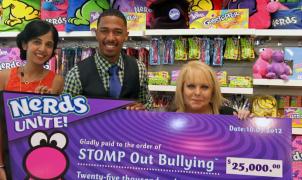 More than 10,000 fans have joined “NERDS Unite!™” in a nationwide stand against bullying.

Let’s face it: we’re all nerds. WONKA®, the maker of NERDS® candy, today announced that more than 10,000 fans have joined “NERDS Unite!™” in a nationwide stand against bullying. To commemorate National Bullying Prevention Awareness Month in October, and to celebrate the success of the first-ever “NERDS Unite!” anti-bullying campaign, WONKA also revealed results from a new national survey that asked 1,000 teens and young adults1 about their views around bullying and personal identity.

Findings of the “NERDS Unite!” survey, commissioned by WONKA and conducted by independent market research firm Toluna, were shared today during a media event at the new Dylan’s Candy Bar store at The Original Farmers Market in Los Angeles. Together with “NERDS Unite!” fans and supporters, including actor Nick Cannon, WONKA presented a check in the amount of $25,000 to STOMP Out Bullying™, the leading national anti-bullying and anti-cyber bullying organization.

“WONKA is thrilled by the success of and positive response to ‘NERDS Unite!,’” said WONKA spokesperson Tricia Bowles of Nestlé USA Confections & Snacks. “We’ve been surprised and encouraged to hear from teens around the country about what it means to be nerdy and why embracing their nerdiness or individuality is so important to help prevent bullying.” Bowles added, “Through ‘NERDS Unite!,’ WONKA has built a dialogue with those who are passionate about anti-bullying. We are proud to bring more attention to this important cause on behalf of the entire NERDS community.”

Amongst the survey findings: more than 54 percent of teens consider themselves as “nerds” about something, and 57 percent think being a “nerd” is cool, demonstrating today’s teens are open to reinvent the original definition of a “nerd.” Also, 60 percent admitted to having been bullied, with more than 57 percent citing “at school or at a school-related event” where bullying is mostly likely to take place in their community. Teens overall shared, with the help of family and friends as resources for support and help, they are more likely to stand up for themselves against bullying.

“What we love about ‘NERDS Unite!’ is that it really empowers teens to embrace who they are, to be nerdy and accept others’ nerdiness, which is a great message to combat bullying,” said Ross Ellis, founder and CEO of STOMP Out Bullying. “With our celebrity advocates embracing their nerdiness, ‘NERDS Unite!” is really giving teens permissibility to be different, and that’s a wonderful thing.”

With its namesake rally cry, “NERDS Unite!” began in late May 2012, and was led by actor and “NERDS Unite!” spokesperson Wilmer Valderrama. He challenged teens everywhere all summer long to join the anti-bullying movement and share online what they are “nerdy for” in order to promote a positive message that embraces individuality, “nerdy” passions, and differences.

Bolstered by additional support from celebrity friends who appeared with Valderrama in a “NERDS Unite!” video at the start of summer, including actor Nick Cannon (America’s Got Talent), singer/actress Jo-Jo, actress Francia Raisa (Secret Life of the American Teenager), and actress Erin Sanders (Zoey 101), WONKA had announced that if 10,000 teens joined the movement this summer, WONKA would donate $25,000 to STOMP Out Bullying. During the summer, “NERDS Unite!” was featured backstage at the TEEN CHOICE 2012™ and backstage at the 2012 MTV Movie Awards™, where even more celebrities signed up for the movement, adding to the growing numbers of “nerds” united against bullying.

There’s still time to join “NERDS Unite!” and proudly tell the world what you’re nerdy about by visiting Facebook.com/Wonka and clicking on the “NERDS Unite!” tab.

About STOMP Out Bullying™

STOMP Out Bullying™ is the leading national anti-bullying and cyberbullying organization for kids and teens in the U.S. It is the signature program of Love Our Children USA, the national nonprofit leader fighting violence against children which was founded in 1999. Created in 2005, STOMP Out Bullying™ focuses on reducing and preventing bullying, cyberbullying, sexting and other digital abuse, educating against homophobia, racism and hatred, decreasing school absenteeism, and deterring violence in schools, online and in communities across the country. It teaches effective solutions on how to respond to all forms of bullying; as well as educating kids and teens in school and online, providing help for those in need and at risk of suicide, raising awareness, peer mentoring programs in schools, public service announcements by noted celebrities, and social media campaigns. An additional focus educates parents on how to keep their children safe and responsible online at StompOutBullying.org.

Dylan’s Candy Bar was founded in 2001 by Dylan Lauren with a mission to bring out the child in everyone. Renown for merging the worlds of art, fashion and pop culture with candy, Dylan's Candy Bar is a pioneer in the candy industry. As the largest state-of-the-art sweets emporium and lifestyle brand, Dylan's Candy Bar is not your average "candy store." The modern day candy land is home to over 7,000 candies from around the world, making it the most popular destination for the ultimate sugar rush experience. Dylan's Candy Bar stores are currently located in New York City, East Hampton, Houston and coming soon to Los Angeles and Miami. Dylan's Candy Bar plans to continue expanding to major cosmopolitan cities in the U.S. and worldwide. For more information please visit http://www.DylansCandyBar.com or www.facebook.com/DylansCandy.

Named one of “The World’s Most Admired Food Companies” in Fortune magazine for fourteen consecutive years, Nestlé provides quality brands and products that bring flavor to life every day.  From nutritious meals with Lean Cuisine® to baking traditions with Nestlé® Toll House®, Nestlé USA makes delicious, convenient, and nutritious food and beverage products that make good living possible.  That’s what “Nestlé. Good Food, Good Life” is all about.  Nestlé USA, with 2011 sales of $10 billion, is part of Nestlé S.A. in Vevey, Switzerland — the world’s largest food company with a commitment to Nutrition, Health & Wellness — with 2011 sales of $94 billion. For product news and information, visit Nestleusa.com or NestleNewsroom.com.

Toluna, Inc. fielded the study on behalf of WONKA from September 15, 2012 to September 25, 2012, via its online omnibus service, interviewing a nationwide sample of 1,000 teens (ages 14 to 17 years) and young adults (ages 18-24). Data were weighted using propensity score weighting to be representative of the total U.S. adult population on the basis of region, age within gender, education, household income, race/ethnicity, and propensity to be online. No estimates of theoretical sampling error can be calculated; a full methodology is available.