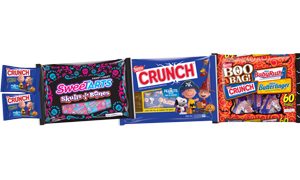 Also new for Halloween, parents can choose Nestlé chocolate items in the Halloween aisle, available for the first time without artificial flavors or colors. Nestlé is pleased to offer classics like Nestlé Crunch, Butterfinger, Baby Ruth, Raisinets, Goobers, Sno Caps, Oh Henry and 100 GRAND—all labeled with the new No Artificial Flavors or Colors banner. This continues Nestlé USA’s ongoing commitment to remove artificial flavors and colors from all Nestlé chocolate candy by the end of 2015.

“Candy isn’t just a given at Halloween--it plays the starring role in everything from trick-or-treat bounty to spooky house gatherings,” said Patricia Bowles, Nestlé USA Confections & Snacks. “This year, we’re particularly thrilled to help families and friends celebrate the season with the classic Peanuts characters they love plus new exclusive and innovative treats for seasonal festivities.”

Available at retailers nationwide, the 2015 Halloween creations from Nestlé are sure to inspire creativity and fantasy.

Nestlé Crunch and Peanuts Partnership
Charlie Brown, Snoopy and the rest of the Peanuts characters have made an indelible mark on modern pop culture.  In addition to The Peanuts Movie, in theaters November 6, Peanuts reaches fans through thousands of consumer products around the world, via both social media and more than 50 television specials. The multi-season Nestlé Crunch partnership with Peanuts marks the first time these two iconic American brands have come together to offer one-of-a-kind chocolate collections for the holidays.

About Nestlé USA
Named one of “The World’s Most Admired Food Companies” in Fortune magazine for eighteen consecutive years, Nestlé provides quality brands that bring flavor to life every day.  From nutritious meals with LEAN CUISINE® to baking traditions with NESTLÉ® TOLL HOUSE®, Nestlé USA makes delicious, convenient, and nutritious food and beverages that make good living possible.  That’s what “Nestlé. Good Food, Good Life” is all about.  Nestlé USA, with 2014 sales of $9.7 billion, is part of Nestlé S.A. in Vevey, Switzerland — the world’s largest food company with a commitment to Nutrition, Health & Wellness — with 2014 sales of $100 billion.  For product news and information, visit Nestleusa.com or Facebook.com/NestleUSA.

About THE PEANUTS MOVIE
In The Peanuts Movie, Charlie Brown, Snoopy, Lucy, Linus and the rest of the beloved “Peanuts” gang make their big-screen debut, like they’ve never been seen before, in state of the art 3D animation. Charlie Brown, the world’s most beloved underdog, embarks upon an epic and heroic quest, while his best pal, the lovable beagle Snoopy, takes to the skies to pursue his arch-nemesis, the Red Baron. From the imagination of Charles M. Schulz and the creators of the Ice Age films, The Peanuts Movie will prove that every underdog has his day. The film opens in theaters everywhere November 6, 2015.