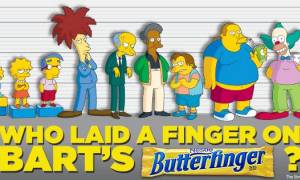 Who Stole Bart's BUTTERFINGER?
Nestlé USA and Twentieth Century Fox Consumer Products today revealed the ultimate crime has been committed: somebody laid a finger on Bart Simpson’s BUTTERFINGER®. With a missing candy bar this delicious, everyone is acting suspicious and Bart has his eye on 12 potential suspects from all around Springfield. Fans can help solve “the crispety, crunchety crime of the century” of who stole Bart’s peanut-buttery BUTTERFINGER by entering the “Who Laid a Finger on Bart’s Butterfinger” online instant win game and sweepstakes promotion found at Facebook.com/Butterfinger or at bartsbutterfinger.com now through November 10, 2013.

“Who Laid a Finger on Bart’s Butterfinger”
Reunited with the BUTTERFINGER brand earlier this year for the first time since 2001, Bart now needs his pals to help track down his stolen bar. In order to help Bart solve the mystery, consumers can find codes inside the wrappers of three limited edition BUTTERFINGER candy bars featuring Bart Simpson found at national retailers. The “Who Laid a Finger on Bart’s Butterfinger” online instant win game and sweepstakes feature more than 100,000 instant win prizes including Homer Simpson snowboards and Bart model cruzers from Santa Cruz Skateboards™, Simpsons Kidrobot® figurines, and a digital download of The Simpsons Treehouse of Horror II. The sweepstakes grand prize includes a trip to Los Angeles and a personalized illustrated portrait in The Simpsons style!

“Bart Simpson is everyone’s favorite mischievous 10 year-old from the longest-running scripted show in television history The Simpsons, and he can’t find his BUTTERFINGER without the help of his loyal fan base,” said Jeffrey Godsick, President of Twentieth Century Fox Consumer Products. “Think you know who laid a finger on Bart’s BUTTERFINGER? Join the fun online and/or in the sweepstakes promotion to win ultimate prizes featuring The Simpsons.”

The nationwide search for the candy bar crook will kick off today with a one-of-a-kind “Who Stole Bart’s Bar?” van tour featuring an elaborate BUTTERFINGER wrapped vehicle, showcasing a lineup of the 12 potential suspects from The Simpsons. Lucky fans can experience the vehicle up close and in person at participating retail stores along the nine city tour, which includes stops at three Springfield cities across the country as homage to Bart Simpson’s hometown. The first to arrive on the scene will have the opportunity to share who they think the culprit is by participating in a promotional T-shirt giveaway that features designs of each of The Simpsons suspects. Brand ambassadors also will be on hand with coupons for FREE limited edition Bart Simpson BUTTERFINGER candy bars, while supplies last. 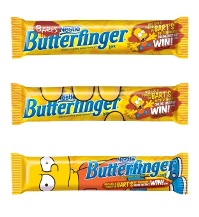 Fans can check out Facebook.com/Butterfinger for location specifics related to each of the local city stops during the van tour.

“Bart has used every trick in the book to protect his beloved BUTTERFINGER, but this time, he needs our help,” said spokesperson Tricia Bowles of Nestlé USA Confections & Snacks. “This nationwide hunt for the peanut-buttery pilferer will bring together consumers who love the one-of-a-kind taste of BUTTERFINGER with friends who want to help reunite Bart with his BUTTERFINGER bar.”

No purchase necessary. Game ends 11/10/13. For free entry and full rules visit Facebook.com/Butterfinger or bartsbutterfinger.com. Open to legal residents of the 50 US & DC, 18 or older. Void where prohibited.

About Nestlé USA
Named one of “The World’s Most Admired Food Companies” in Fortune magazine for 16 consecutive years, Nestlé provides quality brands and products that bring flavor to life every day. From nutritious meals with LEAN CUISINE® to baking traditions with NESTLÉ® TOLL HOUSE®, Nestlé USA makes delicious, convenient, and nutritious food and beverage products that make good living possible. That’s what “Nestlé. Good Food, Good Life” is all about. Nestlé USA, with 2012 sales of $10 billion, is part of Nestlé S.A. in Vevey, Switzerland — the world’s largest food company with a commitment to Nutrition, Health & Wellness — with 2012 sales of $98 billion. For product news and information, visit Nestleusa.com or Facebook.com/NestleUSA.

About THE SIMPSONS
The longest-running scripted show in television history, THE SIMPSONS exploded into a cultural phenomenon in 1990 and has remained one of the most groundbreaking and innovative entertainment franchises, recognizable throughout the world. Currently in production on its record-annihilating 25th season, THE SIMPSONS has won 27 Emmy Awards and been nominated for an Academy Award in 2012 for the theatrical short "The Longest Daycare." They have been the subject of a hit feature film, created a revolutionary virtual coaster ride at Universal Studios, received a Star on The Hollywood Walk of Fame and been honored with five U.S. postal stamps personally designed by Matt Groening. Named the “Best Show of the 20th Century” by Time Magazine, in 2013 Entertainment Weekly named THE SIMPSONS the Greatest American Sitcom.

THE SIMPSONS is a Gracie Films Production in association with 20th Century Fox Television. James L. Brooks, Matt Groening, and Al Jean are the Executive Producers. The Gracie Films Worldwide Brand Division develops and produces the licensed content for the series. Film Roman, a Starz Media Company, is the animation house.