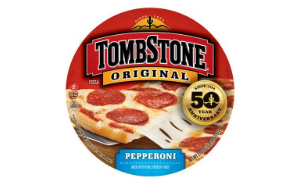 2012 is an historic year for Tombstone® Pizza as the brand celebrates its 50th anniversary. This summer Tombstone is commemorating this golden milestone with the launch of special commemorative packaging available nationwide in July.

In fact, the Tombstone pizza brand is aptly named since it came to life in a bar called the Tombstone Tap located right across the street from a cemetery in Medford, Wisconsin. From a popular local bar offering in 1962, to becoming one of the best-selling pizzas in America today, the Tombstone brand has grown steadily over the years.

What’s their recipe for success? It couldn’t have been accomplished without a commitment to using only high-quality ingredients – not to mention, the dedicated employees (including a manufacturing force in Medford, Wisconsin) intent on delighting consumers, one pizza at a time. As a result, the past 50 years have seen Tombstone Pizza become a part of Americana that’s enjoyed today by millions from coast to coast and also in Canada.

- The first Tombstone® factory was the living room behind the Tombstone® Tap with a total of nine employees.

- The first Tombstone® tagline was, “The Italian pizza with a western name.”

- The big new product in 1979 was Tombstone® Beef Sticks.

- In 1990, Tombstone® launched the iconic, “What do you want on your Tombstone®?” campaign.

- Since 1994 Tombstone has been distributed in all 50 states.