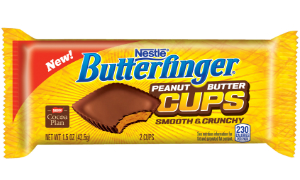 Showing how “the cup just got crunchy,” Butterfinger Peanut Butter Cups feature a smooth, peanut-buttery filling with just the right amount of Butterfinger crunchy pieces mixed with creamy milk chocolate. The single-size 1.5oz. package offers two cups with a manufacturer’s suggested retail price of $0.89-$1.19, while the four-pack, which is a 3.0oz. share-size package of four cups, has a MSRP of $1.69-$1.89.

With advance rave reviews by media, the new Butterfinger Peanut Butter Cups are the #2 highest ranking velocity items within the chocolate category for both the single and share pack in the convenience channel(1), all prior to its commercial debut. Additionally, a recent E! Online poll reported the majority of consumers believe that should a peanut butter cup battle ensue, the new Butterfinger Peanut Butter Cups would reign supreme(2). Butterfinger research also has found 82 percent of consumers polled said they would “definitely or probably” purchase it* even prior to trial.

The official debut of Butterfinger Peanut Butter Cups will mark the first time ever when Nestlé USA will advertise one of its brands at the February 2nd big game. Scheduled to debut in the game’s fourth quarter, the 30-second advertisement will exude the humorous brand personality of Butterfinger. Leading up to the game, fans can view the teaser ad for the commercial at ButterfingerCups.com.

“We are looking forward to putting the spotlight on Butterfinger’s clever, irreverent sense of humor during the most watched telecast and biggest sporting event in America,” noted Natasha Madan, Nestlé Confections & Snacks marketing director, Nestlé USA. “Consumers have said that the peanut butter cup is a favorite flavor combination, so we’re excited to kick it up a notch with a dose of Butterfinger.”

Butterfinger Peanut Butter Cups Made with Sustainable Cocoa
Butterfinger Peanut Butter Cups are part of the Nestlé Cocoa Plan, a global initiative launched by Nestlé USA to help improve the lives of cocoa farmers and the quality of their products while also assuring a sustainable cocoa supply for years to come. The Nestlé Cocoa Plan, first launched globally in 2009, is a $120-million effort to help improve cocoa sustainability and the livelihoods of cocoa farmers through a number of innovative social and economic programs. This includes providing education and training to thousands of farmers and their families; distributing millions of higher-yielding plants; improving infrastructure in farming communities; building or refurbishing schools; and addressing and eliminating the use of child labor in the cocoa supply chain. To learn more, please visit www.nestle.com/csv.

Members of the press may obtain more information, samples and exclusive artwork of Butterfinger Peanut Butter Cups by contacting Jessica del Mundo at [email protected] or 213-623-4200.

About BUTTERFINGER
BUTTERFINGER is a one-of-a-kind candy bar with the crispety, crunchety, peanut-buttery taste people love. No other candy bar comes close to the intense flavor and texture of a BUTTERFINGER. In 2013, BUTTERFINGER marked its “90ish” anniversary, as the candy bar originally invented by Chicago’s Curtiss Candy Company was believed to have been promoted as early as 1923 (before it ultimately was sold to Nestlé in 1990). Keep up with the latest news about BUTTERFINGER at Facebook.com/Butterfinger or follow its sweet tweets at Twitter.com/Butterfinger.

About Nestlé USA
Named one of “The World’s Most Admired Food Companies” in Fortune magazine for 16 consecutive years, Nestlé provides quality brands and products that bring flavor to life every day. From nutritious meals with LEAN CUISINE® to baking traditions with NESTLÉ® TOLL HOUSE®, Nestlé USA makes delicious, convenient, and nutritious food and beverage products that make good living possible. That’s what “Nestlé. Good Food, Good Life” is all about. Nestlé USA, with 2012 sales of $10 billion, is part of Nestlé S.A. in Vevey, Switzerland — the world’s largest food company with a commitment to Nutrition, Health & Wellness — with 2012 sales of $98 billion. For product news and information, visit Nestleusa.com or Facebook.com/NestleUSA.