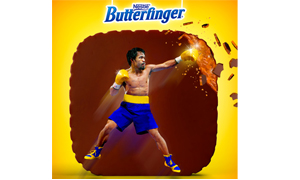 In an earlier announcement, NESTLÉ® BUTTERFINGER® CUPS were revealed today as the go-to-treat in the boxing regimen of the one and only Manny “Pacman” Pacquiao. In actuality, the April 1st news kicks off the “Get In Our Corner” campaign, a month-long rally led by Butterfinger to unite fans around the world to get in their corner with Pacquiao. And there’s still a million at stake – If Pacquiao emerges victorious on May 2, Butterfinger is offering one million of its peanut butter cups in a nationwide payout at ButterfingerCups.com.*

“We’re such fans of what Manny represents and love that he has such a great sense of humor to join us in our April Fools’ Day fun and launch the ‘Get In Our Corner’ campaign,” said Fabiola del Rio, Butterfinger brand manager. “We want fans to get in our corner with Manny and help us celebrate this different kind of competitor.”

Why fans will want to #GetInOurCorner with Pacquiao and Butterfinger for this perfect match made in the ring:

ABOUT MANNY PACQUIAO
Manny “Pacman” Pacquiao is a world champion professional boxer. He is the first and only eight-division world champion with 10 world titles, as well as the first to win the lineal championship in four different weight classes. Beyond boxing, Pacquiao has participated in basketball, business, acting, music recording, and politics. In May 2010, Pacquiao was elected to the House of Representatives in the 15th Congress of the Philippines, at the age of 32, representing the province of Sarangani. He was re-elected in 2013 to the 16th Congress of the Philippines.