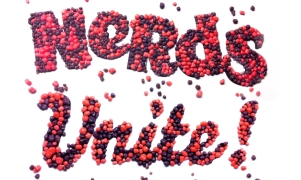 This summer, WONKA® is calling on NERDS® everywhere to unite and celebrate their individuality and stand up against bullying.

This summer, WONKA® is calling on NERDS® everywhere to unite and celebrate their individuality and stand up against bullying. The movement, led by spokesperson actor Wilmer Valderrama, best known for his role on FOX’s “That 70s Show,” is a positive message for teens. Together with the leading national anti-bullying and anti-cyber bullying organization for teens, STOMP Out Bullying™, WONKA today launches the “NERDS Unite!” campaign to remind the world we are all NERDS at heart.

“WONKA has taken the beloved brand of NERDS candy and what that brand stands for – fun, originality, and basically cool nerdiness – and elevated it to a topic that is so important for teens to discuss today,” said STOMP Out Bullying founder and chief executive officer Ross Ellis. “STOMP Out Bullying is proud to partner with WONKA NERDS in putting the spotlight on anti-bullying in a truly creative campaign that embraces individuality.”

All summer long, WONKA is asking teenagers to join the “NERDS Unite!” movement by logging onto Facebook.com/Wonka. There, Facebook users can join the NERDS Unite! Movement, share what they are “a NERD for,” and watch the movement grow.

“Whether your interests lie in books, music, sports, or video games, WONKA believes that we’re all nerdy about something—it’s about celebrating the individuality and differences that make our worlds so much more imaginative, colorful and fun,” said WONKA spokesperson Tricia Bowles of Nestlé USA Confections & Snacks. “NERDS Unite! aims to spotlight the uniqueness, passion, and originality of teens everywhere. If you believe in this cause and join the movement, WONKA will donate to STOMP Out Bullying.”

WONKA will make a $25,000 donation to STOMP Out Bullying if at least 10,000 join the Nerds Unite! movement by the end of the year. Together with STOMP Out Bullying, WONKA NERDS believes we can “STOMP Out Bullying” by being tolerant, kind and respectful, and standing up for each other. For more details about the donation, visit Facebook.com/Wonka.

WONKA NERDS is pleased to announce that actor Wilmer Valderrama, best known for his role as “Fez” on FOX’s “That 70s Show,” is official spokesperson for the NERDS Unite! movement.

“It’s a tough, new world out there for young people dealing with bullying these days,” said Valederrama. “With the Internet and other means of bullying, the NERDS Unite! campaign is as important as ever to remind everyone, young and old, that being different is actually great and totally normal. We all have something we’re passionate or nerdy about, and I love that WONKA is applauding that.”

Valderrama, along with actor, television personality, comedian, and actor Nick Cannon, musician/singer JoJo, and many more have joined the “NERDS Unite!” movement to encourage more teenagers to proudly declare themselves as NERDS. The celebrities will be part of a larger video campaign revealing what they love about NERDS, and what they’re most “nerdy” about. The first official teaser video will be released on June 5, and will be available for viewing at Facebook.com/Wonka.

To find out more about Nestlé, WONKA, or NERDS Unite!, visit Wonka.com or Facebook.com/Wonka.

Named one of “The World’s Most Admired Food Companies” in Fortune magazine for fourteen consecutive years, Nestlé provides quality brands and products that bring flavor to life every day. From nutritious meals with Lean Cuisine® to baking traditions with Nestlé® Toll House®, Nestlé USA makes delicious, convenient, and nutritious food and beverage products that make good living possible. That’s what “Nestlé. Good Food, Good Life” is all about. Nestlé USA, with 2011 sales of $10 billion, is part of Nestlé S.A. in Vevey, Switzerland — the world’s largest food company with a commitment to Nutrition, Health & Wellness — with 2011 sales of $94 billion. For product news and information, visit Nestleusa.com or NestleNewsroom.com.

About STOMP Out Bullying
STOMP Out Bullying™ is the leading national anti-bullying and cyberbullying organization for kids and teens. It is the signature program of Love Our Children USA, the national nonprofit leader fighting violence against children which was founded in 1999. Created in 2005, STOMP Out Bullying™ focuses on reducing and preventing bullying, cyberbullying, sexting and other digital abuse, educating against homophobia, racism and hatred, decreasing school absenteeism, and deterring violence in schools, online and in communities across the country. It teaches effective solutions on how to respond to all forms of bullying; as well as educating kids and teens in school and online, providing help for those in need and at risk of suicide, raising awareness, peer mentoring programs in schools, public service announcements by noted celebrities, and social media campaigns. An additional focus educates parents on how to keep their children safe and responsible online.